Sometimes you hear their calls and look up to see a big flock of sandhill cranes flying so high up in the sky that they are barely visible. It’s rare to see them up close, and I was lucky enough to see them last spring in a pond near Caddy Lake in the Whiteshell.

I received a phone call from a friend of mine who is an avid bird watcher.  He had seen them fly over low and land in the pond just a few yards off the Caddy Lake Block 5 road and told me it may be a good photo opportunity. So I grabbed by camera and drove down to where he was. We tried to be very stealthy as we walked a few yards through the bushes. Once they were in-sight, we crouched low in the tall-grass to ensure we didn’t spook them. I zoomed in with my lens to line up a shot and couldn’t believe how big they were! They are definitely a unique-looking bird. There were three of them hanging out on one side of the pond when another two flew in overhead and landed on the other side. I tried to get a picture of them flying overhead but it happened so quickly that I ended up focusing on some branches and not on the crane – Oh, the woes of wildlife photography. The two groups of cranes continued to call back and forth as they moved across the pond towards each other. Another thing I found astonishing was how loud their calls were. Usually they sound faint when you hear them flying way up in the sky, but when you are up-close, the volume is cranked!

We watched them and took photos for about twenty minutes before heading out; the cranes were still there when we left. Here’s some of the photos I took; not the best but I’m glad I got the opportunity to see them up-close. 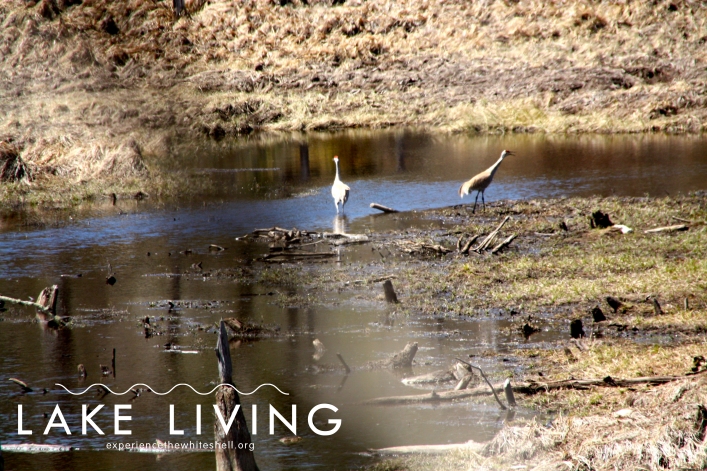 If you have any bird-watching photos from the Whiteshell, we’d love to see them! Send photos to whiteshell.lakes@gmail.com or Tweet us @TheWhiteshell.